Do You Want Lies With That? 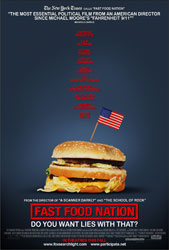 Coming to a theater near you, check out the new film based on Eric Schlosser's book, Fast Food Nation. (I haven't had a chance to see it yet, and won't be able to for a little while, but I would love to hear what you think.) But first, if you haven't seen it already, you must check out Eric Schlosser on the British Newsnight program debating for the first time in public a Mickey D exec. The first time that is because up until now they've said no. If you've never seen Eric speak, you'll be in for a treat: He is brilliant, centered, and has his facts straight. (I was actually surprised that the McDonald's executive was so defensive: His basic argument is that "we have made changes to our food," which sort of hands over the debate, in effect not denying that the food that they have had, and still have, is quite bad for us.) Watch the interview here: Part 1 and here Part 2 and here Part 3. Also, after you watch Part 1, note this disclosure. --Anna