Snap! The Climate Change Movement is Alive and Kicking 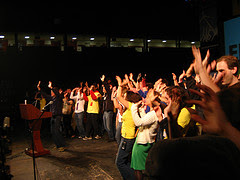 Guerrilla News Network -- Many of us have experienced a global warming moment: it hits us that humans have altered our earth’s climate forever. For founder of the Energy Action Coalition Billy Parrish, who has helped to gather 5,500 people from every single congressional district for a rousing conference this weekend, the moment came on a glacier above the Ganges, one of India’s most sacred rivers.

It was the summer of 2002 and Parrish had hiked to the glacier’s peak with scientists who had been studying the area. Pointing out across the ice, they said: “That’s how far away it was last year; that’s where it was the year before.” Within his lifetime, Parrish learned, the glacier would be gone.

“That glacier feeds a river that supplies fresh water to more than 450 million people,” Parrish said, addressing the darkened stadium during the opening night of this three-day conference in College Park, Maryland, which will culminate with a lobby day on Capitol Hill on Monday.

After his epiphany in India, Parrish dropped out of Yale and launched what would become the Energy Action Coalition. The Coalition now boasts more than forty member organizations at campuses across the country. This weekend’s huge feat – the first national youth summit to address the climate crisis – is the accomplishment of all of these Coalition partners and many other organizations.

Tonight’s opening talks set the tone for the conference: Impassioned, powerful speeches, participatory singing, and a ton of incredible energy.

Author and activist Mike Tidwell (The Raging Tide), one of the speakers, bounded onto the stage and boomed into the mic: “Global warming doesn’t mean anything to me anymore. This isn’t climate change; the climate is snapping into a whole new regime right in front of our eyes.”

“One million people displaced in unprecedented firestorms in Southern California? Snap. My dad calling from Atlanta wondering where he is going to go in three to four months when people there predict drinking water will run out? Snap. The Arctic losing a chunk of ice this summer the size of Florida in the span of one week? Snap.

“If they located the same dirty industries that are polluting our environment in rich communities, we’d have had clean energy a long time ago,” Carter said to much applause, including among the thirty-four young people, in “Green the Ghetto” tee’s who came down with her from New York City.

The movement that brought has pulled off this conference is awe-inspiring in its energy and its rapid uptake: At the beginning of this year, not one single campus in the country had pledged to go carbon neutral. Today, thanks to the Coalition’s Campus Climate Pledge, 430 have done so.

I’m here with my younger brother, environmental scientist Matthew Lappé, who only three years ago was a college student himself—way back when the Energy Action Coalition and its partners had yet to take off. Now, he spends his days working out kinks in proposed policy solutions and studying the science of climate change. “It can get pretty depressing,” he said. “But being here makes me appreciate how quickly this movement has developed, and just how far it has come.”

Find out more at www.powershift07.org.

GNN contributing editor Anna Lappé is the co-author of Grub: Ideas for an Urban Organic Kitchen and Hope’s Edge: The Next Diet for a Small Planet and the co-founder of the Small Planet Institute and Small Planet Fund.