From Mali to Missouri: True/False Film Festival is Going Well in Columbia 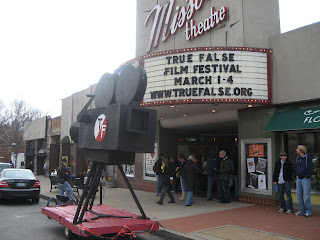 I've traded in my short-sleeve shirts for my wool cap with ear flaps, going from over 100 degree temps to twenty-something and snowy here. I'm in town for the fourth annual True/False Film Festival in Columbia, Missouri. Started by the team that brought this cool, college town RagTag Cinemas, the Festival has grown into an amazing tribute to some of the year's best documentaries. I first met some of these folks when I was in town for Grub research, so it's been fun to return and see many familiar faces and to hear about all of the ongoing great local foods work still alive and well here. Tomorrow morning, we head out for the "Reel Gone Round-Up" screening of KING CORN in a closed-down stockyard auction house where I'll introduce the filmmaker and producer and do a Q&A. Just saw our first films: Sari's Mother and Enemies of Happiness, about a courageous, amazing Afghani woman who ran for a seat in Parliament and despite multiple assasination attempts, survived and won.