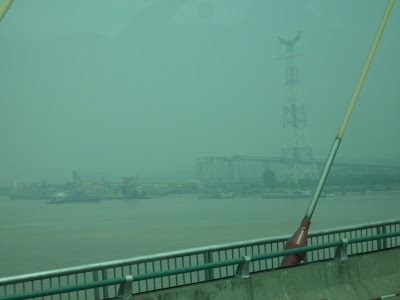 factories along the yangtze
Had a long flight home, made about 36 hours longer than expected because of a missing part on our first plane. I don't think any of us particularly wanted to risk a 13-hour non-stop flight with all the pieces of the plane not accounted for, so we headed back to Beijing for a long night's wait until we finally got out the next day.

I ended up hanging out with the gaggle of businessmen, from a garage-door parts salesman to a baby shoe manufacturer. We talked about outsourcing to China, the 'Wal-Mart effect' of the downward pressure on prices, and the growing environmental nightmare that is China's water, air, and land.

As we lifted off from Beijing's international airport the next afternoon, I could barely see the city through the pollution below and it was so visually clear: We're not just outsourcing our jobs to this country, we're outsourcing our pollution.