My prior associations with this town -- as befits someone of a certain age -- is Laverne and Shirley skipping its streets singing, "One, two, three, four, five, six, seven, eight, Schlimiel, schlimazel, hasenpfeffer, incorporated." But now, I'll add a few more images to the Milwaukee file in the brain, including delicious food, innovative city leaders, and a bustling public market with local purveyors selling everything from cut flowers to pickled okra (great for Bloody Mary's). The night before this pic was taken, we had a Grub party of sorts, an intimate local foods dinner, with city leaders greening the city and connecting urban folks with farmers. 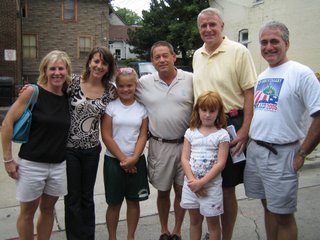 Me with Mayor Tom Barrett and his family at the Brady Street Artisan Food Festival. Far right: Jim Slama from Chicago's Sustain and third from right: Ron Doetch from Michael Fields Agriculture Institute