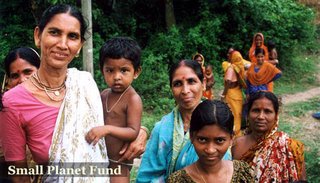 I had just told Muhammad Yunus' story to undergrads at The Evergreen College in Olympia, Washington, the night before I found out that Yunus and the bank for the poor he founded--Grameen Bank--was awarded this year's Nobel Peace Prize. I was reminded of the day I found out another friend and Small Planet Fund grantee, Dr. Wangari Maathai, had been awarded the same honor in 2004 for her work with women and the environment in Kenya. In both cases, the Nobel Committee has made a
clear statement that it is impossible to create peace on earth in the presence of poverty, inequality, and injustice. As we celebrate the 5th year of the Small Planet Fund, we are delighted that another one of our nine grantees has been given such international recognition for their important work. --Anna

Photo: Grameen Bank borrowers near Dhaka, Bangladesh. We had just learned about their experience with the loan and these women and their children were showing us their village.