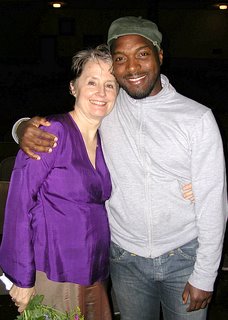 Last night Bethanie and I went to hear Eric Schlosser, who wrote the foreword to Grub, and Charlie Wilson talk about their newly-released book Chew on This, which is being billed as a Fast Food Nation for kids.

Berkeley was their first stop on a multi-city tour. Earlier that day they spoke with students at Martin Luther King, Jr. Middle School, which houses The Edible Schoolyard (Bethanie worked there for four years). They had dinner at Chez Panisse and then came back to King to talk to students and adults. The proceeds benefited The School Lunch Initiative.

Before their talk, Alice Waters (pictured with me) introduced Eric and Charlie, and called Eric one of her heroes. She also gave props to the feature film adaptation of Fast Food Nation, which was selected for the 2006 Cannes film festival.

After giving an informative and moving talk (along with a slide show presentation), Eric and Charlie answered questions and then signed books.

I had the pleasure of meeting Eric in person for the first time and chopping it up before his talk. He signed my copy of Grub and then we took a photograph, but I look like I am high or have vertigo so I won’t post it.